I’m currently busy finishing up the third “book” of my science fantasy novel Adelaide in Ozghard and promoting my new dreampunk anthology Mirrormaze.

I also have a three-part dreampunk novella called Dreck that I’m shopping around for a publisher.

Besides that, I also have a few in-progress works that I’ve had to put on the back burner for the time being. For now at least, most of that is available to preview on Wattpad.

Taking inspiration variously from the life of Philip K. Dick, the music of Neutral Milk Hotel, and James Joyce’s eternally indecipherable Finnegans Wake, Two-Headed Lamb takes you on a transreal journey through parallel worlds. It is a story of loss and reconstruction, empathy and automatization, magic and machinery. 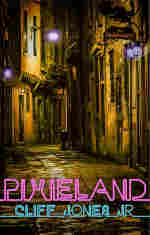 Somewhere in the depths of space, in a city called Memphis, the most ancient myths and legends of our world play out once again, this time guided by an unseen intelligence people have come to call “the little folk.”

Preview Pixieland for free on Wattpad!

Tales of Old and New

This ever-expanding collection of original folk tales spans from prehistory into the far future.

Preview Tales of Old and New for free on Wattpad!